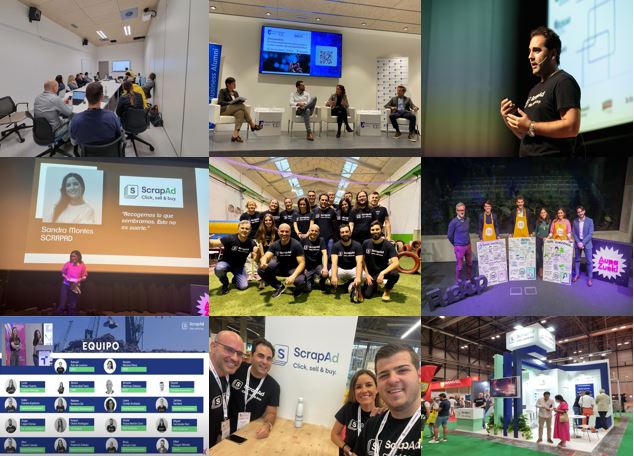 ScrapAd has had a 2022 full of achievements and new challenges. In January, we were nominated for the Green Alley Awards and made it to the finals in Berlin. In addition, our founders, Samuel Ruiz De Lorenzo and Sandra Montes Pérez, met with members of the Basque government to talk about entrepreneurial challenges, the environment and how ScrapAd is leading the digitisation of the recycling sector.

In February, we expanded our operations and opened an office in Madrid. We were also selected by Naturklima. Climate Change Foundation of Gipuzkoa to participate in the "Zirkular mentoring" initiative, which supports the launch of new green and circular economy business projects.

March was a month full of awards for ScrapAd. We won the sustainable business innovation award from El Correo and BBVA and were finalists in the EmprendeXXI Awards in the Basque Country from La Caixa. In addition, we received a boost from ELKARGI through the Innovation Fund and Expansión echoed our project.

In April, Samuel Ruiz De Lorenzo, founder and CEO of ScrapAd, was interviewed by Gananzia.

In May, we attended BIR Barcelona 2022, one of the sector's benchmark events, and we collaborated with the Environment Department of the Gipuzkoako Foru Aldundia - Provincial Council of Gipuzkoa in the GK Recycling conference.

June was a busy month for ScrapAd, as we participated for the first time in the SRR andIFAT Munich fairs, we presented our project at the PERTE Circular Economy meeting and we reached 2,000 followers on LinkedIn. In addition, Sandra Montes Pérez, COO and founder of ScrapAd, was interviewed after her presentation as keynote speaker at the international industrial fair BIEMH - Bienal Internacional de Máquina - Herramienta in the context of WIN (Women in Industry).

In September, Sandra Montes Pérez took part in the Think On Marketing, Think On Woman meeting, talking about how to deal with new changes, hyper-automation and the need to continue to maintain direct contact with customers.

In October, Samuel Ruiz de Lorenzo presented to Accenture employees what it means to be an entrepreneur through the ScrapAd experience. We also presented ScrapAd as a model of responsible management of recyclable materials at the VERSOS, Landfills and Sustainability conference. We were also interviewed on the Etorkizuna Orain podcast and selected from over 180 applicants to participate and present our project at the seventh edition of B-Venture, the largest entrepreneurship event in northern Spain. In addition, ScrapAd becomes the first marketplace to obtain BCorp certification in Spain.

In November, we attended the Ecosystem Builders event organised by South Summit and participated in the event "Technological entrepreneurship as a vector of competitiveness", held at the University of Deusto, where we explained what it means to be an entrepreneur and create a disruptive platform such as ScrapAd. We also presented our project at the entrepreneurial event Eibar Business Market and Sandra Montes Pérez  was a finalist in the Women Startup Awards of Women in Tech Spain.

In December, we participated as speakers at the fifth edition of Aupa Zuek + Fuckup Nights, where Sandra Montes spoke about her entrepreneurial experience. We also had our own ScrapAd Christmas Fest and our team now numbers 20 people! In addition, our customers come from 77 different countries.

It has clearly been a fantastic and productive year for ScrapAd, with many achievements and challenges along the way. We are excited to see what the future holds and continue to lead change in the industrial recycling sector through our innovative digital platform.