"Social impact is the most important part of our raison d'être" says Patxi Casal, Director of Alzola Mineral Water. 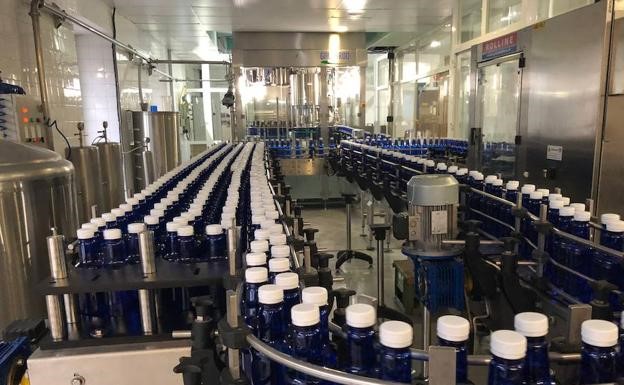 Patxi Casal Velaz, Director of Alzola Mineral Water, opened the doors of the spa where the factory is located to talk to us about water, its history, natural resources and the importance of the packaging of his product.  Find out all about it in this interesting interview:

1. Alzola, the best water in the world, how is this distinction achieved?

The beginning of this distinction began in 2001 with the First Blind Tasting of the Millennium of natural mineral water held in Bilbao, where Alzola was awarded the first prize.

From that moment on, as a result of internal reflection, it was decided to start on the path of creating a Water Culture, in three fundamental aspects;

The first in its composition, both in chemical and physical values, demonstrating since the 18th century, through both national and international medical studies, its especially compensated value for the treatment of diseases related to the urinary tract and the kidney.

Secondly, a process of popularisation was launched in order to highlight its social aspect on a global level. It should not be forgotten that the inhabitants of the Earth, who are between the Tropic of Cancer and the Tropic of Capricorn (a majority), have the greatest problem of being short of drinking water for consumption, irrigation and industrial processes. This lack of water for consumption has generated a problem, which today is still not a priority, causing the great famines that occurred in the 20th century and which have increased in the 21st century, leading to massive human migrations in this region and therefore extreme poverty in most of the countries currently affected. Focusing on this problem is one of the axes that we maintain in Alzola, because we believe that, if it is not alleviated urgently, it will be the biggest problem on the planet in the near future.

And thirdly, the environmental aspect, we are aware that one of the current problems is the depletion of natural resources, either by overexploitation or by the current pollution of the environment. Evidently it is a global problem that affects everyone and it is likely that the point of no return has already been reached, so that transferring objective data to the public, without bias, becomes even more pressing, and for this reason we are constantly working on the Water Culture, on environmental issues.

In 2015, we brought the Association of Consuls to our old house in Alzola, where we informed them of our actions related to being the Best Water in the World, so that they could pass them on to the different countries they represent, and from then on we systematically maintain contact to carry out specific actions, based on dissemination.

2. The history of Alzola goes back a long time. Can you tell us something about it?

The beginning of the Alzola Spa, as a medical establishment for the treatment of illnesses (mainly kidney and stomach) through its natural mineral water, began in 1801, being declared of public utility in 1843.

For years, it was studied by the most eminent doctors of the time, and obtained the highest recognition and awards of the time for its properties, at a time when medicine was deeply rooted in spa establishments. It was awarded the medal of merit by Alfonso XII, and several medals at the pioneering universal exhibitions in Paris, Buenos Aires and Bogota.

In the 19th century and in the first decades of the 20th century (until its closure as a spa establishment) it was visited by all the personalities of each period, including Alfonso XII himself, Napoleon III, Sagasta, and almost all the industrialists who were pioneers in the industry at the time. It was also the inspiration for several films of the time, and even for the book El Balneario, with which Carmen Martín Gaite won the Café Gijón prize in 1954.

After its closure as a health establishment, the marketing of Alzola Water began in bottled form at a national level through the pharmacies of the time as a medicine for curing kidney and urinary tract problems, until the 20th century, when it was awarded the first prize in the First International Blind Tasting Competition of the millennium, which if possible was the most important recognition in its career to become the Best Water in the World, as we have mentioned above.

Subsequently, in 2012, as a result of the global crisis, Alzola went into a deep commercial depression that led it to make very substantial changes, changing its name to Alzola Basque Water and reflecting on its way of doing things from that moment onwards.

The water of the Alzola spring is born naturally (without exploiting the aquifer artificially with any drilling) at 28.5 degrees centigrade (it is thermal) from a depth of some 800 metres and after a 25-year journey through the bowels of the Izarraitz massif. It is a miracle of nature.

3. What role does digitalisation play in Alzola?

Social impact is the most important part of our raison d'être. We know that a company that is not socially committed will have no place in the market in the medium and long term. In fact, we can say that all our actions are based on social responsibility. We currently collaborate on an ongoing basis with some 120 associations of all kinds, children and youth, health, sport, environment... and although we sometimes think that we devote more time to them than we can, the reality is that whenever something is done for society with simplicity and humility, the return is great.

In all this development, digitalisation has been key, especially in the communication processes with our public.

4. What innovations have contributed most to the brand in recent years?

Apart from the social innovations that we have implemented, what is certain is that the development of packaging in its different formats has been fundamental and, although we do not have large budgets, on many occasions it has determined the success of certain markets that we have entered. We are pioneers in some of them, and in general they have been very successful.

It is also important to understand that the Alzola factory is very unconventional, due to the fact that it is established within the Spa itself, in its old hotel houses, and therefore the implementation of its atypical lay-out has often required innovations in industrial development.

5. Do you consider that companies are taking advantage of the new business opportunities presented by the recycling of their materials or production with recyclable materials?

In general, what we know is that there is a lot of discussion, but little practical implementation. Society is listening, but there is a lot of confusing or misinformed information, which makes it difficult to implement actions with recycled materials.

It is also true that society at the moment is not willing to pay for a more sustainable future, the dictates that are made in public are not carried out in private, which causes contradictions and often huge inefficiencies.

On the other hand, production with recycled materials (not to be confused with recyclable) is often not feasible due to their high price and low availability on the market, together with the fact that studying the associated environmental cycles, they are currently in most cases more harmful than virgin materials themselves. There is still a lot of work to be done in this aspect until both the products and the knowledge of the administrations and users with real data that will lead to industrial practices that are really more beneficial than the current ones are put on an equal footing.

6.  Alzola's packaging is 100% recyclable. How has the process been to reach this 100%? What difficulties have you encountered along the way?

The companies that are at the centre of the discussion on the use of plastic materials are the ones most interested in good sustainable practices. That is why since 2017 we have been regularly reviewing all our packaging and the best way to adapt it in a sustainable way.

Last year, we launched a product on the market called Ecobox, which reduces the materials used per litre of water by 70%, as well as obtaining the best sustainability levels of any current packaging in a very important way.

7. How do you recover the waste generated in the production process?

In the production of natural mineral water, there is very little industrial waste. The waste that is produced is handled by authorised waste management companies.

8. What are the challenges for the future of Alzola?

The future of Alzola depends on managing to keep its spring safe from any difficulties. In other words, in 2012 it was on the verge of disappearing, and for this reason we are particularly sensitive to ensuring that, regardless of our management, the integrity of the Alzola spring is not endangered. We are working to create a social figure of protection, which we hope in 2023 will see the light and can be conformed. We had actually planned to carry it out in 2022, but the circumstances arising from the flooding in December 2021 disrupted the plans and had to delay them.

9. Finally, how do you think ScrapAd can help the circular economy?

ScrapAd, as a platform for buying and selling recyclable materials, should be a driving force for the circular economy, offering security and verification of the materials and the agents involved in the transactions, a role that they occupy in a prominent and very professional way.

The relevance of recycling in the industry